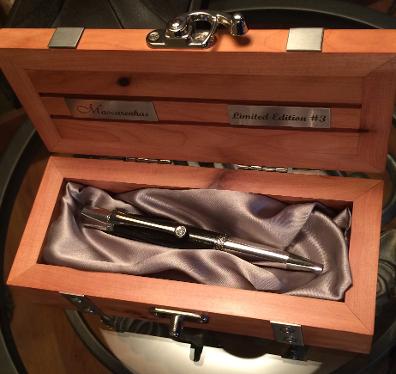 The wood used in the pen is 250+ year old Lignum Vitae, recovered from the Atlantic Ocean, from the shipwreck of the French ship "L'Union", which sank off the coast of Bermuda in 1763, when it hit a reef in bad weather. Lignum Vitae is Latin for “wood of life”, and derives its name from its medicinal uses. Found in the Caribbean islands and South America, Lignum Vitae is the hardest, heaviest, and most close-grained wood known. Its density almost equals that of iron and in some parts of the world it istherefore referred to as ironwood.

A handcrafted box made from 100+yr old Bermuda Cedar can be additionally purchased to gift with the pen. The box can be ordered in any one of the below styles: Dome shaped chest box, Flat top chest box (displayed in the picture), Barrel box.